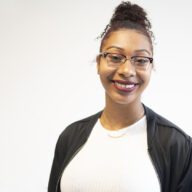 Khalia Willett is studying for a Dance Level 3 Extended Diploma at City of Oxford College. She is passionate about dancing and her background is in street dance and freestyle disco. She knew she wanted to study dance at university and therefore would need qualifications to support her application.

Initially, Khalia did a year of sixth-form college before applying to City of Oxford College. She said of her time in sixth form that she was underwhelmed by the enthusiasm that her teachers there showed for the subjects they were teaching. She said:

“I was in classes with a lot of students and doing the courses because I could do them; I wasn’t really passionate about the courses and I was just doing them because I knew I could get a grade out of them. I wanted to do something that I was good at and liked, rather than just doing what was in front of me.”

After being accepted onto a programme at Activate Learning at the City of Oxford College, she hasn’t looked back. She was quite nervous about coming to the college at first as she didn’t know anyone else who went there but, she said that, “I’ve made some really close friends in my time here though, so it’s definitely been worth it.”

Khalia has found the course and the tutors at Activate Learning to be engaging and informative and is enjoying her time here. Specifically, she states that, “The types of dance are really varied. The course has introduced me to jazz and ballet, which are things that I’d never thought of doing or thought I’d need, but in applying to uni, that kind of diversity in my technique is something that I really need; it’s what they want to see.” Despite thinking that the programme would be all practical; all dancing, all day, she has admitted that, “There’s more theory in dance than you think!” Luckily though, she has also found that, “it’s all relevant to what you’re doing. On the dance floor, we relate the theory to our practical assessments.”

One of several standout features of her course was one of the first things she studied here: historical context.

“We watched Cabaret, with Liza Minnelli, and we did two routines from that. One routine was choreographed for us and the other we had to choreograph parts of it. Our coursework was then to write about Cabaret, the dances shown in that movie, where they came from etc, so the theory and the practical all work together.”

She added that, “I’ve learnt a lot more from the theory study than I expected!” One of the best things about the programme is the practical application of the written, theory work that she does alongside the practical elements.

“I’ve done a lot of theory where I didn’t really take anything in from what I had done. But because of what I learnt here, I was able to take inspiration for my final project from Matthew Bourne, the English choreographer. If I hadn’t have learnt about him at Activate Learning, then I wouldn’t have known about his work to the extent that I do now.”

Khalia is practicing at various studios around Oxford, not just Activate Learning and was recently involved in Move It, Europe’s largest dance workshop. At the time of speaking, she was training and rehearsing for another show called Breaking Convention.

She has been accepted into four universities that she’s applied to but is unsure about what offer to accept. The way that the universities train their students is very different to one another, and there are a number of other factors to consider, such as proximity to friends, family and what it is that she really wants to get out of her university experience.

In her own words, Khalia says that, “College has helped me prepare for uni because, before, I doubted myself. My tutors here are really supportive and always stay in touch with me about my auditions and how I’m getting on.”

Asked about whether or not she would recommend Activate Learning, Khalia had some practical and thoughtful advice for prospective students. She said, “Your improvement is based on what you do. You can’t depend on someone else to make you improve. Whether you want to train with a dance group or a college, it’s up to you, but I knew I needed a dance qualification to get into uni, so I came to college. You can still improve if you put the work in. It’s up to you.”