The students were split into two teams to cycle or row (or a combination) 101 miles as a relay, in recognition of 101 years of the Royal British Legion, with the aim of raising £1001. They have raised over £544.

The fundraising event took place in the Recharge café at the Church Road campus on Wednesday 2 November between 9am-4pm, with both teams completing the relay by 11:50am.

Students studying their second year of our Public Services Level 3 Extended Diploma organised the fundraising event as part of a unit to better understanding the third sector.

Gary Headland DL, Chief Executive of Activate Learning, visited the fundraising event to chat to the students about the Royal British Legion and take part in the fundraising activities, by cycling for an hour.

This was a cause very close to his heart as the former president of the Royal British Legion in Lincolnshire. 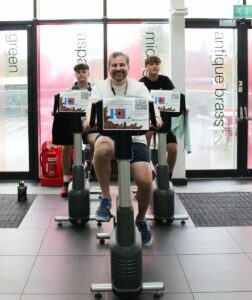 Shannon Pooley, 17, from Bracknell was one of the students that took part in the challenge.

“We chose to do a physical activity that incorporated 101 miles in recognition of 101 years of the Royal British Legion.

“It’s been great. I really enjoyed taking part. I’ve learnt about teamwork because we were swapping in and out for each other to make the goal more achievable.

“It was really nice to have our CEO involved. We got lots of support from students and staff, which was great.” 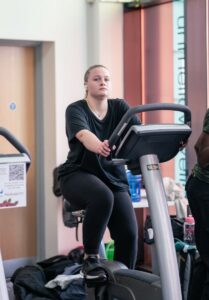 Great to see the students working together

Daniel Ellis, Public Services Teacher at Activate Learning, said: “The Royal British Legion is no longer just about the Armed Forces, it’s also the emergency services as well who have been affected by terrorism and war. As the students are looking to join the emergency services and armed forces in the future, it is a great opportunity for them to support them.

“It’s been really good to see them working together on this project. They’ve been enhancing their teamwork, communication and problem-solving skills.

“It’s also created a great spirit of camaraderie and being able to support charity work and knowing that the money raised will support veterans and families of veterans to make their lives better when they’re going through hard times.

“Having our CEO supporting the students and getting involved is really inspirational and motivational. It’s always great when a leader leads by example.” 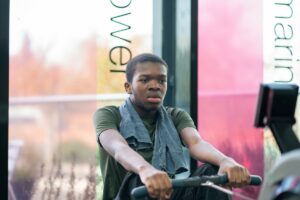 Extremely proud of our students

Gary Headland DL, Chief Executive of Activate Learning, said: “I was extremely proud to get involved in the fundraising activities for the Royal British Legion. As a former military professional and having previously been President of the Lincoln branch of the Royal British Legion, this is a cause that is very close to my heart and one that I consider of great importance.

“It has been fantastic to see our Public Services students at Bracknell and Wokingham College working together as a team to raise money for the Royal British Legion and showing their respect for a charity that supports our Armed Forces community.

“Congratulations on raising over £450. A massive well done! I couldn’t be prouder!”

If you would like to support our students’ fundraising efforts, donations can also be made via their Just Giving page.

Find out about our Public Services courses available to study at Bracknell and Wokingham College or contact us on 0800 612 6008.