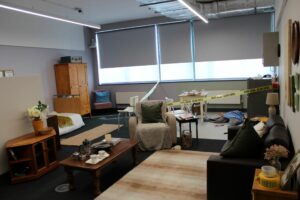 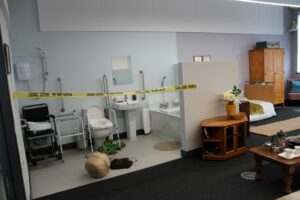 The flat at the college on Church Road was turned into a fake crime scene. Students were given the scenario that a 26-year-old nurse who lives on her own was found dead by the police after neighbours found blood signs and called the police. 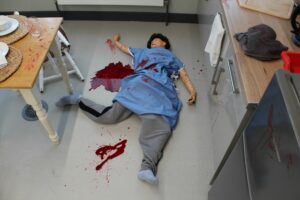 What students were asked to do

Students were asked to examine, draw a sketch of and photograph the scene, make notes and take samples for evidence.

In our immersive suite, they also interviewed a pretend suspect and witnesses and took part in a court exercise, where they had to defend their interview.

The students also analysed samples in one of our science labs and produced an analysis report.

This exercise helped to put our students’ learning into practice and gave them a glimpse of what it’s like to investigate a crime scene. 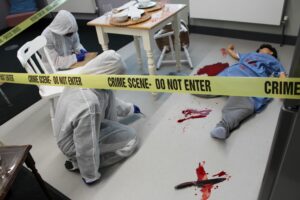 What the students thought

She said: “Doing practical work helps me to understand the theory and put it into context. It makes it easier to process.

“In the future, I would like to be a paramedic or forensic detective, so this exercise has helped me to be more confident and see how it relates to my career aspirations.”

Sharon Rees, Law and Criminology Teacher at Activate Learning, said: “This was a great opportunity for the students to put their learning into practice.

“It also gave them a glimpse of what it would be like in the future for them if they attend a crime scene, court or need to interview suspects and witnesses if they choose to pursue a career in Forensic Science.”